In 2014 I went to the Milltown Institute in Ranelagh, an old suburb close to the centre of Dublin, to collect a lovely old standing press. Established by the Jesuits in the 1880s as a school of theology and philosophy, it is still a teaching institute today. The Jesuit Library once had a full bindery, and though the library is still full operation, the bindery closed many years ago. The library slowly found good homes for the most of the equipment and sundries and I got some of the last pieces, including a few boxes of type, book papers and I didn’t know what else. I just grabbed a few things a saw lying around, since main purpose was to transport this 300kg book press back to Leitrim in my Skoda Fabia.

Last week I opened one of the boxes (a Henry Wintermans cigar box). Here is what was inside: 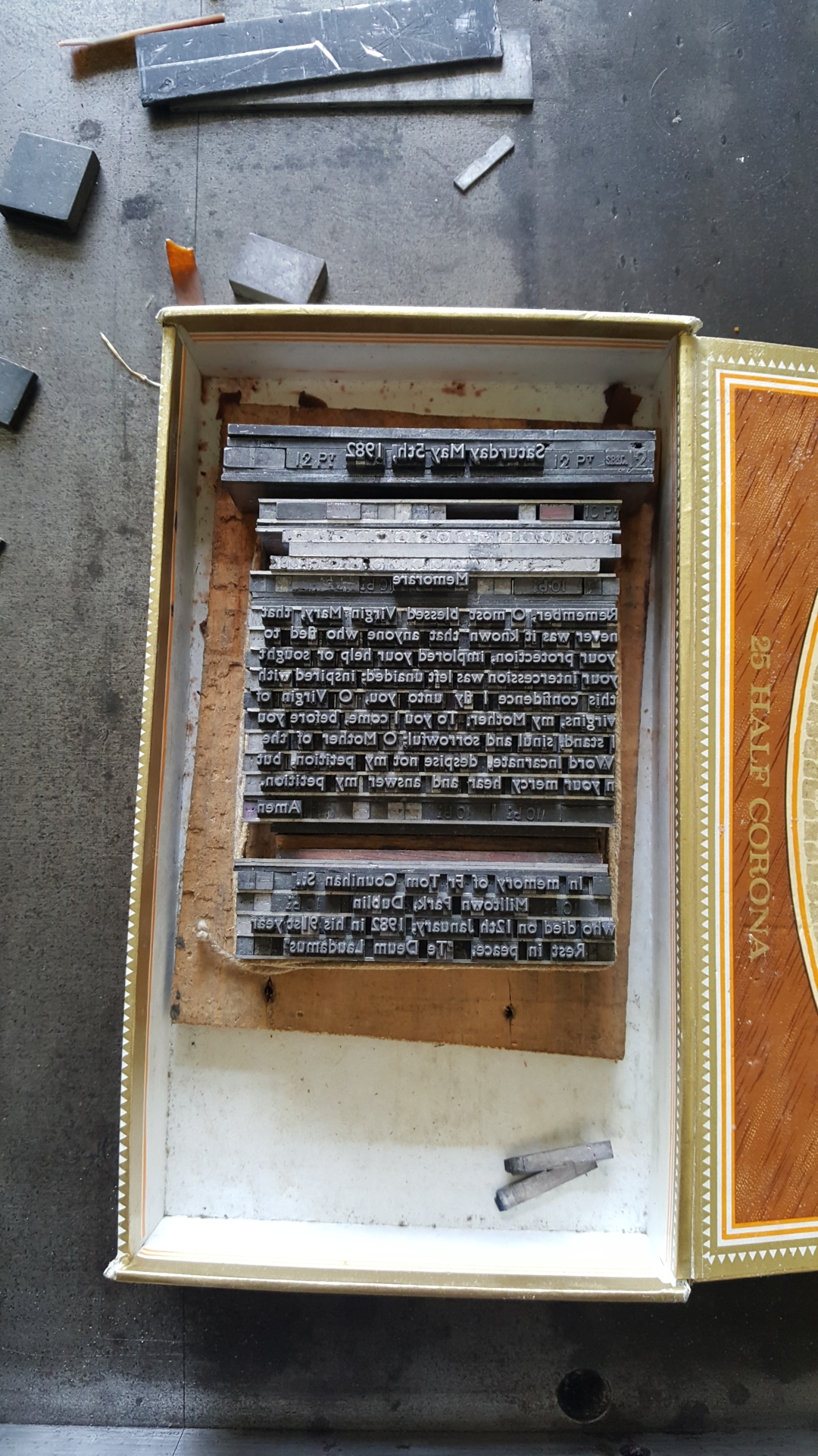 I felt very moved and humbled thinking about the last time anyone had looked at this type and set it in this box, the hands that touched it, the ink it carried and the hands that wiped the type clean. I had a sense of reverence for this object – probably seen at the time in 1982 as an unremarkable piece of work like many many others – that was the product of human hands at nearly every stage. And my reverence for the object was the only way I could pay respect to those hands, and I felt a little sadness thinking that in this digital world such objects and experiences are becoming impossible.

Here is a poem by the American poet Robinson Jeffers (1887-1962) called Hands, that also captures that same idea I think:

Inside a cave in a narrow canyon near Tassajara
The vault of rock is painted with hands,
A multitude of hands in the twilight, a cloud of men’s palms, no more,
No other picture. There’s no one to say
Whether the brown shy quiet people who are dead intended
Religion or magic, or made their tracings
In the idleness of art; but over the division of years these careful
Signs-manual are now like a sealed message
Saying: “Look: we also were human; we had hands, not paws. All hail
You people with the cleverer hands, our supplanters
In the beautiful country; enjoy her a season, her beauty, and come down
And be supplanted; for you also are human.”

View all posts by Scott Coombs